Orientalis fall out at Inghirami C? 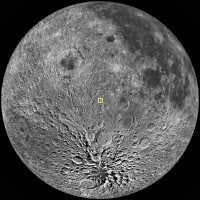 The floor of Inghirami C is littered with boulders that are commonly perched atop closely spaced mounds, some of which are as large as 700 meters by 1000 meters. The presence of these mounds and boulders gives the floor of the crater a lumpy appearance. If simple craters are supposed to be bowl-shaped, where did the material come from to form the mounds? Inghirami C is located southeast of Orientale basin and is adorned with spectacular patterns of ejecta during the basin forming event. Could the lumps and boulders be material from Orientale?

Using basic stratigraphic principles, this means Inghirami C formed after the Orientale ejecta formed the ridged terrain (seen just outside the rim of Inghirami C in the context image). If the material in the floor didn't come from Orientale or any other large crater nearby, then it must be native to Inghirami C. It turns out that not all simple craters are bowl-shaped with smooth floors -- and in fact many display textured floors covered in combinations of breccias, impact melt, and ejected blocks that can form mounds. Over time, the mounds erode, leaving the boulders seen in today's Featured Image.

Back to the question: Could the lumps and boulders be material from Orientale? Not directly as established above, but perhaps the irregular forms are due to an impact into a chaotic, unconsolidated massive ejecta flow from the Orientale event! The lunar surface is incredibly complex - everywhere you look there is something new, waiting to be explored!

Check out the rest of this exquisite terrain HERE.