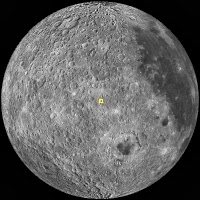 Today's Featured Image highlights the northern portion of the ejecta deposit splashed from an unnamed crater (~2.7 km in diameter, about 5 km south of this image) located in the highlands ~800 km northwest of Mare Orientale. The curved stripes from the bottom toward the upper-left of this image represent the flow direction of ground hugging ejecta deposits.

As shown in the classic impact cratering model, the ejecta is ballistically sprayed out of the impact center forming an ejecta curtain. After the ejecta curtain impacts the outside of the crater, it flows in a ground hugging horizontal motion until its kinetic energy is completely dissipated. The ejecta direction depends on flow speed and the local topographic slopes or undulations.

As seen in this second image, the flow direction of ejecta curved along a bowl shaped topographic low (probably a degraded old crater). These characteristic flow lines following the local topography allows scientists to estimate the actual flow speed. In turn, these estimates elucidate detailed mechanisms of ejecta emplacement on the Moon and by comparison other airless bodies, such as asteroids and the planet Mercury