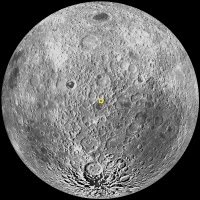 Impact crater ejecta is typically brighter than the surrounding material because it is fine-grained and immature (unweathered); even on the dark mare, fresh craters usually have bright ejecta. Craters with distinctly dark ejecta do occur, but they are rare (e.g., Shorty Crater at the Apollo 17 landing site). When craters have dark ejecta, the interpretation is that a layer of low reflectance rock or soil at depth was excavated and distributed around the margin of the crater. In the case of Shorty Crater, the conclusion is that a layer of dark pyroclastics was hidden just beneath the surface; in other cases, dark halo craters are interpreted to indicate mare material at depth (cryptomare). Several of the craters formed by the impact of spacecraft hardware, such as the Apollo 13 S-IVB, into the surface also have dark ejecta rays, and this observation is not yet well understood.

Our dark halo crater (31.131°S, 147.536°E) has a diameter of about 78 m, although it is slightly elongate in the north-south direction. Rays of dark ejecta extend for almost 200 m from the crater rim. Morphologically, the crater is not the normal simple bowl shape for a crater of this size. Rather, a depression on the crater floor in the center is surrounded by a low ridge about 33 m in diameter; beyond that annular ridge to the crater wall the floor appears to be flat. Boulders are scattered on the crater floor and on the ejecta to the east; the largest boulders on the east side are as large as 6 m across.
This crater formed on the outer flank of a larger older, degraded 635 m crater. Highlands ejecta (higher reflectance than mare) from this larger crater buried the mare. Later the impact that formed the younger dark halo crater punched through the bright highland ejecta and brought up mare from 10 meters or more depth.

Explore this region of the Moon in the full NAC image, HERE.