Secondaries of all sizes near Mare Moscoviense 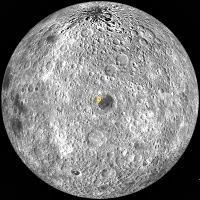 Secondary craters are produced by debris lofted during excavation of primary impacts. They can be difficult to distinguish from primary impact craters if they are circular with well-developed ejecta patterns. That ambiguity is a concern to scientists when counting craters to determine the ages of planetary surfaces. This age dating approach assumes that impact flux has held steady throughout geologic time following the Late Heavy Bombardment period ending approximately 3.8 billion years ago. The model thus assumes that older surfaces present more craters than younger surfaces, and that one can determine relative ages by counting the number of impact craters per unit area.

Crater counts give reliable relative ages, but can also be translated to absolute ages using the radiometric age dates of rocks returned by the Apollo and Luna missions. Obviously counting statistics are skewed if secondary craters are included in the count; these "extra craters" create the false impression of an older surface.

Often, as in today's Featured Image, the distinction between primary and secondary craters is unambiguous. Here we see a large number of impact craters in a tight cluster. Particularly apparent when exploring the full NAC frame, we can see a clear association within this cluster, not merely a coincidental grouping of separate features spaced in time across many eons. Their ejecta exhibit higher reflectance than most of the craters in the surrounding areas, and they form a tighter grouping than other fresh-looking craters seen elsewhere in the frame.

More secondary impact features can be found across the full NAC frame, HERE. Other secondary craters can be explored in earlier LROC Featured Image releases "Swarm of Secondaries," "Dark Secondary Crater Cluster," and "The Rays of Messier A."
Posted by Joel Raupe at 12:00 PM