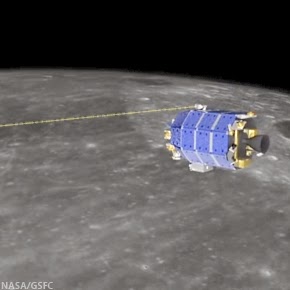 NASA's Lunar Laser Communication Demonstration (LLCD), onboard the LADEE lunar orbiter, has made history using a pulsed laser beam to transmit data over the 400,000 km between the Moon and Earth at a record-breaking download rate of 622 megabits per second (Mbps).

LLCD is NASA's first system for two-way communication using a laser instead of radio waves. It also has demonstrated an error-free data upload rate of 20 Mbps transmitted from the primary ground station at White Sands, New Mexico to the spacecraft orbiting the moon.

"LLCD is the first step on our roadmap toward building the next generation of space communication capability," said Badri Younes, NASA's deputy associate administrator for space communications and navigation (SCaN) in Washington. "We are encouraged by the results of the demonstration to this point, and we are confident we are on the right path to introduce this new capability into operational service soon."

Since NASA first ventured into space, it has relied on radio frequency (RF) communication. However, RF is reaching its limit as demand for data capacity continues to increase. The development and deployment of laser communications will enable NASA to extend communication capabilities such as increased image resolution and 3-D video transmission from deep space.

"The goal of LLCD is to validate and build confidence in this technology so that future missions will consider using it," said Don Cornwell, LLCD manager at NASA's Goddard Space Flight Center in Greenbelt, Maryland. "This unique ability developed by the Massachusetts Institute of Technology's Lincoln Laboratory has incredible application possibilities."

LLCD is a short-duration experiment and the precursor to NASA's long-duration demonstration, the Laser Communications Relay Demonstration (LCRD). LCRD is a part of the agency's Technology Demonstration Missions Program, which is working to develop crosscutting technology capable of operating in the rigors of space. It is scheduled to launch in 2017.
Posted by Joel Raupe at 8:33 PM