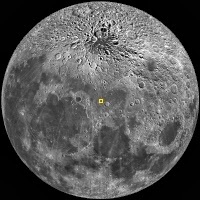 Lunar mare present many excellent examples of wrinkle ridges, where tectonic activity caused the foreshortening of near-surface rocks. The loading of large basins by dense mare basalts is thought to have resulted in isostatic adjustment of the underlying anorthositic crust, leading to buckling and overriding of surface rock units one atop another as compression occurred. The same stresses may also produce extensional (rather than compressional) deformation in adjacent areas. A variety of complex landforms can thus result.

Most of the ridges we see in today's Featured Image are produced by thrust faulting in Mare Frigoris. Just below center in the Featured Image frame, however, is a left-lateral strike-slip fault (also called a sinistral fault). Wrinkle ridges can be lumpy and ropey-looking, not exactly what comes to mind when one thinks of a textbook compressional fault. But in cross section the faulting would be readily apparent (refer again to the links above). Just south of the strike-slip fault are zones of extension where tension cracks have formed (small white arrow in Featured Image).

Morphologic nuances can be explored elsewhere in the NAC frame. Note the ropey appearance of some of these ridges, again showing that motions within the rock were complex indeed. Other examples of strike-slip faults have been found in association with lobate scarps on the Moon. Recent evidence suggests that shrinkage of the Moon from deeply seated internal cooling may have contributed to the occurrence of some lobate scarps and wrinkle ridges.