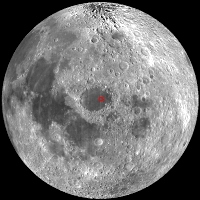 A buried thrust fault cuts through the mare, but not completely. Instead of breaking the surface, the fault pushes material upwards and causes the mare to fold over the fault.

This folding leads to a wide variety of wrinkle ridge morphologies. Despite this variation, all wrinkle ridges are made up of a larger ridge with a smaller superposed ridge.

So when did all of these wrinkle ridges form?

The law of superposition argues that they must be younger than the mare basalt they deform. The basalts in Mare Crisium range in age from 2.5 to 3.3 billion years old!

These dates come from measuring the radioactive isotopic systems of samples returned by the Soviet Luna 24 mission. If these dates are correct and representative of the surface, the wrinkle ridges here formed after the basalts were deposited. Did the ridges start forming after 2.5 billion years? Probably not. Several mare flows also 'pond' behind wrinkle ridges, so the wrinkles must predate at least some mare material and potentially formed over the same time period. One billion years is a long time to go without tectonic deformation after all. One thing is probable, the wrinkle ridges continued developing after mare volcanism shut off in the area.

Explore more of the wrinkle ridge in the full LROC NAC, HERE.