First in a series of posts highlighting newly-suggested landing sites selected to address high-priority science goals - from a remarkable lunar landing site study published by the Center for Lunar Science and Exploration: 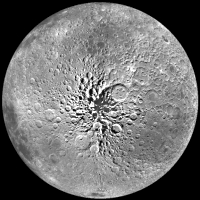 In November the Center for Lunar Science and Exploration, a distinguished science team sponsored by the NASA Lunar Science Institute (NLSI), released a set of comprehensive lunar landing site studies fashioned carefully on the lunar Science Concepts and Goals outlined in the National Research Council's influential 2007 report The Scientific Context for the Exploration of the Moon.

The last section of the eight-part study addresses the possibility of exploration and sample return from South Pole-Aitken basin and how sites selected there might fulfill all Science Goals outlined in the 2007 NRC report. Meanwhile, within the CLSE Landing Site Study, the section addressing NRC Science Concept 4 is directed at the important goal of gaining ground truth regarding the life cycle of volatiles on the surface of the Moon, and especially their retention in permanently shadowed cold traps near the north and south poles. Though a study for a potential New Frontiers-class mission to study lunar volatiles was included in the 2013-2022 Decadal Survey, it was not specifically included in recommendations for a South Pole-Aitken basin sampling mission and a new lunar geophysical network during the decade ahead.

The CLSE Landing Site Study recommendations, however, were constrained by many of the limits placed on a manned mission, both within and beyond the Constellation program, cancelled as the studies developed.

To groundtruth, so to speak, the real-time transport, loss and retention of lunar volatiles (e.g., water and hydroxyl molecules, neutral hydrogen or the exotic species tossed up by the LCROSS impact) the team working on NRC Science Concept 4 carried out a careful study of the north and south polar regions and, as announced originally at the 43rd Lunar and Planetary Science Conference, Amundsen crater emerged as one of the far south's most favorable locations. (The lunar north also had targets emerging from the data, more perhaps than in the south, we hope to also spotlight in near future.)

A refrain repeated often in the CLSE Landing Site Study was emergence of a many favorable targets, some familiar and some not. However, with budgetary stresses unlikely to disappear soon, identifying those areas presenting the greatest probability of addressing multiple science concepts, visiting as few landing sites as necessary, has become valued work. Beyond emerging as a bright target in remote sensing of volatiles, Amundsen presents the added virtue of being within South Pole-Aitken. Examples of targets addressing overlapping priority science goals also included Schrödinger basin and Antoniadi crater.

(The work continues. Just this past week the Center announced the availability of a web-based ArcGIS tool for evaluating SPA landing sites.)


Over five summers successive groups of students worked on each of the 2007 Science Goals outlined by the NRC, as the economic, political and lunar science environment evolved around them.

The Constellation program was scrubbed, including the Altair lander, though the on-time and under-budget unmanned supporting missions already well-along in development survived. LCROSS and LRO, fortunately, thrived together, along with development of the ambitiously efficient precursors GRAIL and LADEE. As the momentum originally put into motion by Constellation and the aftermath of the Columbia accident finally experiences a kind of inevitable "heat death," however, the specifics of the future of U.S. unmanned exploration of the Moon is gravely in doubt. Notwithstanding a supposed plan to return astronauts to the lunar vicinity later in the decade, it's difficult to imagine how such a mission can improve upon the science returned by LRO.

That first summer the LPI interns began with data rooted still in the 20th century. Five summers later, fresh teams, focused on subsequent NRC Science Goals, were assisted with results from missions entirely rooted in the 21st century. They were fortunate enough to sample the first sips from a fire hose of data eventually returned from Japan’s Kaguya, India’s Chandrayaan-1, China’s Chang’E-1 and 2; along with results from LCROSS and, perhaps most important, the record-breaking data still coming down from the Lunar Reconnaissance Orbiter.

Constraints on a the starting prospect of manned missions to the Moon, those "sorties" seen as originating from "an extended human presence" at a permanent station on the rim of Shackleton crater, were lifted before the CLSE Landing Site studies were published. By the time of the study's release pinning NASA or Congress down on the ways and means of accomplishing lunar science seemed similar to keeping spaghetti on a fork. Nevertheless, if the only permanent legacy of the defunct Constellation program turns out to be studies like the one produced by CLSE, assisted by a swarm of well-managed and efficient unmanned spacecraft like LRO, it may very well prove to be worth every penny "wasted" on the Ares boosters and the Altair lander. (There are, of course, other windfalls worth mentioning beyond the scope of this Introduction.)

Their finished product speaks well for itself, and the editing and teaching skills of the Student Intern Program coordinators and study co-editors David A. Kring and Daniel D. Durda of the Lunar and Planetary Institute. A host lunar targets, many still unnamed, have augmented the 50 Constellation Regions of Interest.

“As this study unfolded, it became clear the Apollo landing sites, while completely reshaping our understanding of the solar system 50 years ago, represent only a tiny fraction of the lunar surface," Kring wrote last November.

"Other sites can reveal completely new details of lunar history and are, arguably, better sites for addressing the fundamentally important issues identified in the NRC's 2007 report.  This study asked a simple question, where on the lunar surface could the objectives in the 2007 report be addressed?

"Maps keyed to each of those objectives were created and, when those maps were stacked, several lunar surface locations popped out as the scientifically-richest landing sites."

"Volatiles at the Lunar South Pole: A Case Study for a Mission to Amundsen Crater" (LPSC 2012, #1619), acknowledged the yeoman labor on addressing "Science Goal 4," fleshed out in depth in the CLSE Landing Site Study:

From  "Science Concept 4: The Lunar Poles are Special Environments that may bare witness to the Volatile Flux over the latter part of Solar System history."

We chose Amundsen crater because it has many easily-accessible sites that address all or most Science Goals (IV).

A broad range of geologic features is also present within Amundsen; these include crater floor materials, crater walls, wall slumps from higher on the crater wall or rim and central peak material. It also contains many smaller craters with varying degrees of degradation. Sampling these various morphologies may place constraints on distribution of volatiles, partially addressing Science Goal 4a.

We identified two landing sites (A and B) on the floor of Amundsen crater lit up to one quarter of a lunation (Zuber et al., 2011).

Those sites provide access to stations within (Permanently Shadowed Regions) while providing a base of operations in an illuminated region. Stations outside of PSRs can serve as experimental controls for the processes that affect volatile distribution within PSRs. Contrasts between the two regions can also be used to evaluate transport mechanisms. Remotely observed circular polarization ratios (CPR) (Zhang and Paige, 2010) also vary around both landing sites, providing an opportunity to ground-truth the global data set and test the effects of ground ice and surface roughness on those CPR values. Temperatures derived from the Diviner radiometer (Paige et al., 2010) also helped define station locations.