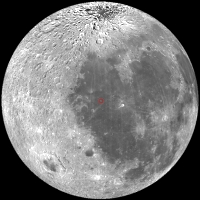 Schiaparelli E, located in central Oceanus Procellarum, presents a floor made partly smooth by an accumulation of impact melt, and partly rugged by debris collected within or on the pooled melt. Low-reflectance boulders litter the surface like sprinkles on a chocolate cupcake.

A radial excavation pattern is also apparent on the slopes of this crater, particularly visible in the full NAC frame.

Notice the sharply defined contact between the margins of the melt and the surrounding crater walls. Note also how the melt has been fractured and fragmented where it thinly mantles the central debris mound.

The Schiaparelli crater complex (consisting of Schiaparelli and Schiaparelli A, C and E) is named after Giovanni Virginio Schiaparelli (1835-1910), who is remembered primarily for his painstaking telescopic observations of Mars during its 1877 and 1879 oppositions. Schiaparelli's claim - to have seen and mapped a network of straight lines (which he termed "canali") on the Red Planet - sparked a debate about their existence, origin, and meaning.

Today we know these martian linear features to be purely illusory. Yet a public fervor (together with unbridled speculations on intelligent inhabitants) was fueled for many decades over them by the supporting observations of Bostonian amateur astronomer Percival Lowell, the science fiction of H.G. Wells, and the showmanship of Orson Welles. Schiaparelli himself (for whom craters have been named on both the Moon and Mars) never intended to imply anything more than a natural origin for the features he thought he saw. Although most professional astronomers disregarded Lowell's claims, not until the Mariner 9 orbiter mission in 1971 was the myth of the straight lines finally put to rest.

Notice how the few impact craters visible in the Schiaparelli E floor deposits are shallow with hummocky interiors. These are a special type of impact feature called a bench crater, formed when a hard rock surface is overlain by a thin veneer of regolith.

HERE is another example from a previous Featured Image post.

Other than these few small, bench craters, and the fresh rubble salting the floor, this crater appears to have changed little since it formed. Imagine that you are the first to observe this crater at high resolution. What additional lines of evidence would you cite to make yourself comfortable claiming recent impact before a panel of professional planetary scientists?

See the full NAC frame HERE. Other examples of crater floors have been discussed in (the LROC posts) Sunny-Side Up, Crater in 3D!, and Farside Impact!
Posted by Joel Raupe at 7:44 PM