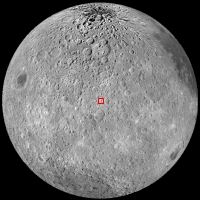 Today's Featured Image highlights a portion of an impact melt sheet that splashed from an unnamed crater about 13.5 km in diameter.

In context mosaic below, a yellow arrow indicates a slightly darker region within the blue box, which corresponds to this impact melt sheet. The extent of this melt is about 48 square kilometers.

The narrow lineations extending from upper-left to lower-right indicate the flow direction of the melt, and likely consists of multiple flow lobes. You can also see some regions, like those near the top of the image, where flows were wider and end in round lobes. Depending on multiple factors such as the underlying slope, ejection speed, and viscosity of the melt, impact melts exhibit a wide variety of the surface patterns and morphologies. The melt here appears to have flowed at a high velocity, probably because the crater formed on the relatively steep slope of Joule T's wall.