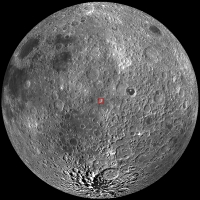 Because the lunar surface records events dating to early epochs of Solar System history, it is tempting to think of the Moon as a place of inactivity. While this may be true in a relative sense when comparing the Moon to Earth's constantly changing surface (with its weather patterns, ocean currents, and tectonic processes), one can still find signs of recent change on the Moon. We see this evidence in fresh impact craters, debris flows and even some tectonic activity.

Boulder trails on or near the base of a lunar slope are another example of recent change. The featured boulders are located at the northeast base of Scaliger crater's central peak. The irregular shapes of the rocks caused them to waggle this way and that as they wended their way down the slope, resulting in irregular patterns in the soft lunar regolith. Their low roll velocity allowed them to move at right angles to slope contours (thus straight downhill at every point), producing curved trajectories.

Additional boulder trails can be found in Sampling a Central Peak, Weaving Boulder Trails on the Moon and A Recent Journey.
Posted by Joel Raupe at 7:30 PM