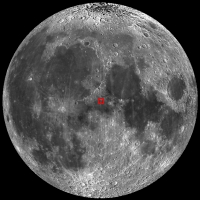 This dome (16.4°N, 3.3°E) lies immediately south of a mare inundated "ghost crater" approximately 7.5 km in diameter and appears to have partially affected part of that craters southern rim.

SELENE-1 (Kaguya), Chang'E-2 and Clementine albedo imagery clearly display dark pyroclastic material distributed upon the inner slope of the ruined ghost crater and adjacent to the north of the prominent dome, suggesting an ash type deposit. On the summit, a shallow depression is located, which likely corresponds to the vent or a collapse feature.

A presumably non-monogenetic mode of formation may be responsible for the peculiar shape of the dome, consisting of two layers, as shown in the derived data.

With a diameter of 5.2 kilometers and a height of 620 meters the dome appears to show evidence of mulch-phased activity modification from regional tectonic movements. Spectral analysis released on the calibrated and normalized Clementine UV/VIS and NIR reflectance data shows a LPD (Lighting Power Density) characteristic of pyroxenes and olivine.

According to its irregular shape, with the presence of two layers, the dome presumably formed during several stages of effusion, a process that may build up steep edifices, like in the Marius hills.

In this scenario we argue that the examined region has undergone an effusive process (in several eruption phases), before forming a steeper construct (average slope around 13°) and a subsequent explosive phase of volcanism forming the dark pyroclastic deposit.

Representing this thinking the dome resembles some of the steeper domes among the Marius Hills, raising questions about sources of magma on the Moon's surface. A complete work is ongoing reporting our results collected by making use of LRO WAC images, SELENE-1 and Clementine multispectral data, the LOLA digital elevation model and the LROC WAC-based GLD100 DTM.

Results from this study were featured by Charles Wood as Lunar Picture of the Day, February 15, 2012 and discussed in a forum post at Cloudy Nights Telescope Reviews.
Posted by Joel Raupe at 8:01 PM