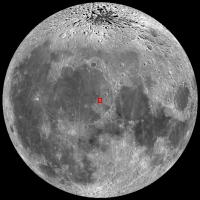 A collection of rocks up to about 8 m across surround a small shallow crater, also about 8 m in diameter. A series of bright ejecta rays surround the area. The site lies on the edge of one of the northeast faulted terraces of Archimedes crater (83 km) at 30.154°N, 357.141°E.

Understanding the origin of this distinctive scene is not necessarily straight forward. At the center is a shallow crater about 8 m in diameter, and a series of bright rays extend away from the crater out to distances of about 150 m. Note that some of the blocks seem to block the rays. On the southwest side there is a large rock about 6 m across, bright lanes of ejecta extend past it on both sides but not behind the rock. To the north, a collection of rocks forms a semicircle; within that semicircle is bright ejecta, but not much beyond.

Not all of the rocks in the scene are related to this event. To the northeast there is a bright, partly buried rock about 12 m across, and the west-southwest an elongate rock 7 x 14 m rests of the surface.

The question is, what happened?

One possibility is that there was already a collection of rocks on the surface and a small meteor happened to hit in a small open area among them; then as the ejecta spread out, it was blocked by the rocks.

Another possibility is that there was a giant boulder at this location that just happened to get hit by a small meteor, shattering the boulder into the pieces that now surround the crater.

The third possibility is that a large boulder ejected during the impact of Archimedes (or from some other nearby impact) landed here and shattered upon impact making a small crater. If the boulder was from the Archimedes impact, it must have been launched into a high trajectory such that it hit the surface only after most the impact activity had ended.

The area of the rock garden lies on the edge of the Archimedes terraces.  Archimedes is 83 km diameter and lies on the eastern edge of Mare Imbrium.  It is filled with and surrounded by mare basalts on most sides. The crater floor lies a couple hundred meters below the surrounding mare.

Explore more of Archimedes in the full LROC NAC, HERE.