Lobate debris aprons on the Moon? 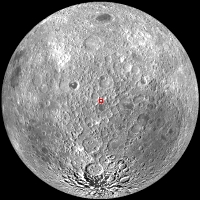 Similar in appearance to some lobate debris aprons on Mars, these deposits are found at the base of a craggy escarpment where cascading rock and dust has accumulated in an unusual pattern. Irregularities in the outcrop topography channeled and funneled the debris as it moved over them, producing overlapping mounds which were themselves sculpted by subsequent debris flow.

Theories used to explain the rounded or "softened" appearance of similar features on Mars often involve the lubrication or "creep" activity of buried ice deposits. This cannot be the case on the Moon, of course, which is depleted of water and other volatile substances. While ice may be involved in many of the Mars aprons, features such as these serve to caution the student of planetary science to consider all possible modes of origin when exploring new terrains.

Additional features collected from the same region can be viewed at LROC Featured Image posts like Pile Up, and Scours and Ejecta Near Jules Verne Y. Additionally, examples of debris flow features can be viewed at Debris Flows in Kepler Crater, Rock Slide in Rima Hyginus, and Multiple Flow Lobes.
Posted by Joel Raupe at 6:59 PM