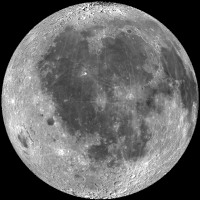 The Featured Image shows the lower slopes of the northeast inner wall of the Kepler impact crater (8.1°N, 322.0°E, diameter 32 km). Loose material often moves down the steep slopes of impact craters, and there are many examples of lunar landslides. The observation that such landslides exist on the Moon were first made during the Apollo program using the images taken from the Command Module while it was in lunar orbit.

This landslide is composed of a range of particle sizes from well below the pixel scale (1.25 m/pixel) to boulders as large as 20 m. Debris slid down the walls and spread out across the crater floor being locally deflected by obstacles on the crater floor. The crater wall has a slope of about 33°.

In the center left of the (top) image, a coarse debris flow was diverted around local topography into several narrow (up to 12 meters wide) flows that extend an additional 400-500 m across the slope and crater floor. Boulders accumulated at the base of the debris flows after rolling all the way down the slope. Debris flows occurred numerous times in this location, as well as many other locations around the crater wall. The material acted as a fluid as it moved downslope flowing around and over obstacles and ponding behind obstructions despite the fact that there was no water present.

Above is a reduced resolution version of a larger area around the image shown above (outlined by the white box). Several bright debris flows are observed along the inner crater wall. The area around Kepler crater is illustrated in the wide angle image below.