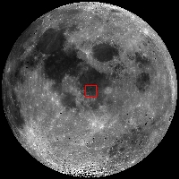 Today's Featured Image focuses on ancient craters that predate mare basin flooding, and which are often recognized by subdued, sometimes discontinuous circular patterns best seen near local lunar sunrise and sunset (high solar incidence as measured from the surface normal). These circles mark the locations of once majestic excavations in the lunar crust. However the emplacement of volcanic deposits filling, surrounding, and overtopping the rims have buried these ancient craters in many instances. The presence of the near-surface rims produce local stresses in the deposits, which in turn deform the mare layers. The result is a wrinkle ridge-like topography with a circular pattern. They are thus often referred to as "ghost" craters, and can be found haunting many large, basin-filling mare deposits.


At least two large ghost craters can be found here in the Mare Fecunditatis basin just south and southwest of the crater Ibn Battula. Some portions are simply unrecognizable as former crater rims without the large scale mosaic for context (see example below).


Examine the full NAC frame (HERE) to see a greater length of ghost crater rim. Another example of a ghost crater is presented in the Ghost Crater in Southern Mare Crisium, a Tier 2 Constellation program Region of Interest. Contrast the appearance of a ghost crater to that of a flooded crater (e.g., as in Balcony Over Plato).
Posted by Joel Raupe at 10:31 PM