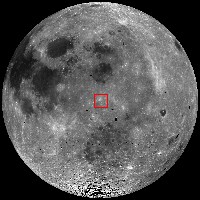 These distinctive flows are found on the top of the older impact flows (older by seconds or minutes), and you can also see small channels formed as the molten rock flowed around blocks on the rim. These relations show us that this distinctive fingered flow was emplaced after most of the other ejecta. So how did this melt get to this location? One hypothesis is that this deposit of melted rock, along with all of the other ejecta produced by the impact that formed this crater, was expelled almost vertically. In this scenario, the melt that formed this deposit was then simply among the last to fall back to the surface, where it flowed around and over some of the ejecta that had fallen previously. Alternatively, this melt deposit could also simply be some of the last impact melt to be ejected from the crater during the last part of the excavation stage. No matter its exact origin, it is inspiring to see the tremendous forces of nature creating artistic patterns on our nearest neighbor.