Hole on A Melt Sheet 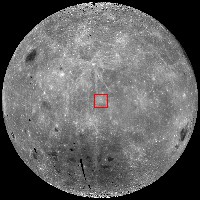 Korolev X is a 25-km crater located at 0.54°N, 200.59°E. As seen in the bottom image, the northern rim of this crater was destroyed by a younger crater about 16 km in diameter. The heat from the impact that formed this younger crater melted a large volume of rock, which flowed down onto the floor of Korolev X, creating a sheet of solidified melt 14 x 5 km across. The opening image highlights a dent in the surface of this melt sheet.

This dent is about 105 meters in diameter. Considering the existence of multiple, similarly-sized (around 100 m in diameter) craters on this melt sheet, this dent is most likely an impact crater even though neither an ejecta blanket nor a raised rim can be clearly recognized. Along the top of the crater wall there appears to be a thin layer of the melt sheet that is exposed and highlighted by the angle of the sun. Below this surface layer no clear layering is observed, implying a rather homogeneous structure. Small craters like this are often observed in impact melt sheets, and why they lack typical features of impact craters (a well-defined raised rim, a thick ejecta blanket) is still not well known. Could these craters have formed when the impact melt was still partially molten?