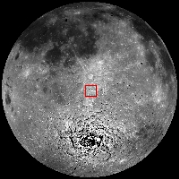 Granular debris flows are found in many young impact craters and are the products of mass-wasting. Over time, material from the crater rim and walls erodes into successively finer particles, and when the influence of gravity becomes too much this material moves downhill. Observations of mass-wasted material are prevalent in the LROC NAC images, and the detailed morphology of the flows are striking. Examples are composed of low-reflectance material when compared to the crater walls, fine-grained fingers superposing coarser-grained flows, as well as meandering flows interweaved with one another. Although debris flows on the Moon exhibit many spectacular morphologies and features, the presence of the flows represents relatively recent activity of a geologic process that is still active today.


Some debris flows show evidence of multiple formation events in the form of superposed lobes of material or braided channels, and today's Featured Image is no exception. The debris flow descending across the center of the image (51.725°S, 347.058°E) has braided, meandering channels at the upper left (uphill) that gradually disappear downslope into larger lobes of material. The lobes are most easily distinguished at the lower right corner of the image (downhill) where the flow terminates, and there are at least three individual flow units (and thus separate depositional events) that can be distinguished by a faint outline of higher-reflectance material. However, what makes today's flow special is the ~13 m diameter impact crater superposed on the flow because both of these features are geologically young. The presence of an impact crater on a debris flow suggests that the flow may not be geologically active at present and may not have been geologically active for some time (although constraining that time period is difficult).

Because the debris flows form in the young, least-degraded craters and do not often exhibit degradational features (such as superposed impact craters), determining the absolute age of the flow is impossible because the flow may have formed 100 million years ago or yesterday. However, the presence of a superposed impact crater on a debris flows constrains the relative age of the flow because the crater must have formed after the flow was deposited. Crater counting techniques are frequently used by lunar scientists to estimate an absolute age-date for a surface, but there have to be craters to count! For the moment, we must be satisfied knowing that enough geologic time has passed for the flow pictured above to accumulate one crater. Alternatively, LROC could target this debris flow (or others like it) and acquire additional observations over time in an attempt to understand the geologic history of these spectacular features. Because who knows - maybe a seismic event (moonquake, impact) will dislodge material upslope to flow downhill that erases the crater!

Can you find additional impact craters superposed on the debris flows in the full LROC NAC, HERE?

Hint: there is at least one other crater superposed on a debris flow in the opening image.