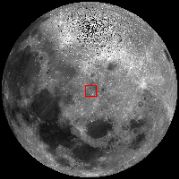 Boulders of different sizes zipped down the interior slopes of Shuckburgh E, a 9.22 km diameter crater located at 44.042°N, 57.018°E. As the boulders bounced and rolled down the wall, they carved trails through the regolith. Click on the Featured Image above to take a closer look at more boulder trails. If the trail is discontinuous, like a dashed line, then the boulder was bouncing. If the trail is continuous, then the boulder was rolling. As they lose momentum the boulders stop bouncing and instead plow through the regolith until they come to a standstill. The largest boulder track in today's Featured Image is about 5-7 meters across! To put this into perspective, 5.5 meters is about the height of an adult giraffe.

Boulder trails are not only pretty, but in some cases they could help human or robotic explorers sample material that is otherwise hard to reach. For example, in Schrödinger basin, a rover could land on the relatively safe, smooth floor and sample boulders that fell from peaks and rims. Material at the top of peaks and rims is scientifically interesting since it is excavated from deeper in the lunar crust. Boulder trails help trace back to the original location of the boulder, making it possible to locate boulders that originated from different points on a peak. Boulder trails were used during Apollo 17 to determine the location of the Station 6 boulder!