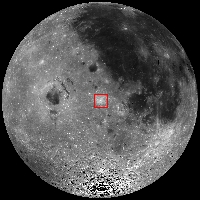 We have featured the impact melt flows of Byrgius A before, but today we are focusing on the ejecta.

Above we can see that the ejecta blocks have a mixture of two reflectance levels. Maybe the impact is excavating two separate geologic units: one with low reflectance, and the other with high reflectance.

Can we figure out which hypothesis is correct?

If the crater is excavating two different units, then we should expect to see nearby craters exposing the same. We don't see this in the context image. Several lines of evidence argue instead that impact melt covers some boulders: [1] the darker boulders have a similar reflectance to the impact melt, and [2] the dark boulders have pools of material.

Can you test the hypotheses further with the full LROC NAC, HERE?