Secondary melt on the rim of Weiner F 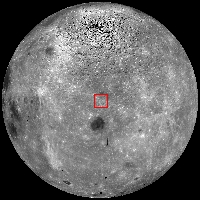 The low afternoon lighting in today's Featured Image gives the impression that this surface has been sculpted or reshaped somehow.

When an impact occurs, ejecta is thrown out and can scour the exterior rim of the crater.

In this case, the scours are also covered by an impact melt veneer from the same event. Several parallel scarps in the impact melt imply that the melt was emplaced in discrete events.

How could this have happened?


Impact melt is common in the interior of impact craters, covering the crater floor and crater terraces. Sometimes impact melt also sloshes over the rim of a crater, forming flows. In some cases, the ejected melt forms exterior melt ponds, and in the case of Wiener F an exterior melt pond has formed in an older crater! It is likely the exterior pond formed from several pulses of accumulating impact melt. As the impact melt sloshed around the crater interior, it repeatedly spilled out of the north rim, making several waves on its way down. Similar melt veneers are seen elsewhere on the Moon, such as exterior to King crater.

Explore more of the impact melt at Wiener F crater in the full LROC NAC, HERE