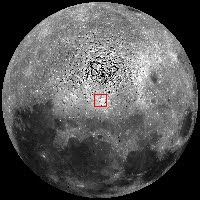 Anaxagoras crater (73.458°N, 349.934°E, ~52 km diameter) is a complex crater with terraced walls, central peak, and substantial impact melt deposits. After impact melt is created during the impact event, significant portions are often ejected from the crater in much the same way as the unconsolidated excavated rock that forms the typical ejecta blanket. However, most melt does not contain sufficient energy to escape the crater interior and is instead splashed onto the crater walls. If the melt remains hot enough, the splashes and globs of melt on the walls may coalesce and descend toward the crater floor under the influence of gravity.

Sometimes, the flowing impact melt creates channels by eroding the substrate or building up levees. In today's Featured Image, an impact melt channel formed in the lower section of crater wall terraces, near the last major break in slope close to the crater floor (73.286°N, 351.500°E). Many small, channel-like features occur in this area of the crater wall, and the channel origin is difficult to discern and may actually be located upslope to the lower left, outside the view of the Featured Image. Often, channels form in a path of least resistance, that is, where preexisting fractures and weakness occur - and crater wall terraces are prime locations for heavily fractured target rock. This channel ranges from ~95 m to 160 m across and has clearly defined walls until the upper right of the image, when part of the channel disappears. Why the disappearing act?


Flowing impact melt has a specific lifetime and when the melt cools enough, it stops flowing. There are a couple of plausible explanations for the disappearance of one of the channel walls. First, some melt may have traveled down the channel until it cooled enough solidify near the tail end of the channel, thus clogging the channel pipeline. Alternatively, a relatively thick veneer of melt may have been splashed onto the wall at a late stage, thus obscuring and erasing the channel wall. Another possibility is that there is a change in slope that influenced the melt to breach the channel wall and instead flow toward the top of the image, an explanation perhaps supported by the change in concavity in the channel from concave up (somewhat U-shape) to concave down (upside-down U-shape). However, additional observations, including the use of a NAC derived topographic maps, are crucial to determine which hypothesis (or another!) is the best explanation.

How many impact melt channels can you find in the full LROC NAC image, HERE.