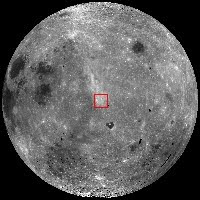 Today's Featured Image highlights the southern edge of an impact melt pond, located on the floor of Necho crater. Necho is a relatively young, Copernican-aged crater (meaning, it formed between ~1.1 billion years ago and the present) with a diameter of 30 km, located on the farside of the Moon (5.25°S, 123.24°E).

As seen in the WAC context image below, the crater floor is filled by impact melts. The meandering line of boulders in the opening image was found near the bottom of a north to northeast facing slope. There is no clear relief or texture difference on the surface except this boulder line. How was it formed?

Probably this line of boulders was formed as a splash mark or wave front coming from the melt pond, driven by secondary impacts or debris dumped into the melt pond. In fact, impact melt flows frequently retain similar boulder lines along the edge of each flow unit (see Scale-like Impact Melts, A molten flood). Also, discontinuous boulder marks at the upper part of this image extend downslope, near the relatively level melt pond area, which might be a side of the splash flow.