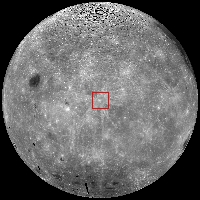 As molten rock cools, it shrinks and often cracks. In this case of impact melt ponded within the Jackson crater floor (22.18°N, 197.24°E), the cracking rate was so high that unfractured melt is almost more of an exception than a rule!

Radial and divergent patterns can be seen among the fracture sets that tell a story of the cooling history. The context image below shows a portion of their wider distribution.

Solid objects in the melt, together with the 'shore' of the pond, appear to have influenced the way the cracks organized themselves as the melt cooled. Note how the fractures bend around or radiate from some of the positive relief features in the images above. These could be ejecta blocks or portions of the slumped crater walls in the melt that served to locally accelerate cooling. Their influence might thus be to 'seed' the stress field within the shrinking melt volume, helping some of the cracking to grow from these points, and ultimately resulting in the patterns we see today. Sagging along the shore can cause the cracking to parallel the shoreline. Any motion within the volume of melt, possibly influenced by late-stage additions of molten material, may also have contributed to the patterns observed here.

The extent and complexity of the melt pond features can be explored in the full NAC frame HERE. Additional examples of impact melt cracking include Polygonal fractures on Tycho ejecta deposits, fractured impact melt in Thales crater, and Moore F.

Ed Note: In a way opposite and contributing to the low optical visibility of the vast majority of similarly sized craters in the farside Highlands, Jackson is easier for the eye to see than most. Like Tycho on the nearside, there are a lot of craters of similar size and origin everywhere on the Moon. The difference is age. Like Tycho, the ray system of Jackson (and the materials its progenitor impact threw out) shows Jackson's "optical immaturity." To illustrate, below are two representations of the farside quadrant with the highest of the Highlands scoured by the Jackson impact, likely less than a half billion years ago.