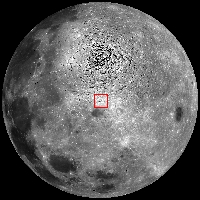 
Due to the tremendous energy released by an impact event large portions of the target rock is melted. This impact melt forms distinctive flows and ponds both inside and outside of its parent crater. In many young craters the LROC NAC has captured deposits that look as if they formed yesterday.

Today's Featured Image is on the northern slope of the Hayn crater central peak. Due to the peak's steepness, it is rough and craggy. In many places on the peak wavy deposits are seen between crags and blocks; these deposits are most likely impact melt. Truly amazing, first the central peak formed then impact melt splashed down and coated it. If this interpretation is correct you can say that the peak formed in matter of a few seconds, quickly enough that melt that was thrown during the impact had not yet landed!  Quantitative measurements of these kind of spectacular outcrops, using new accurate topography from LROC NAC stereo will help reveal how impact craters form.


Explore the craggy peak and impact melt deposits, both on the peak and the floor of Hayn crater, HERE.

Related Posts:
On the floor of Green M
Splash and flow
Ejecta in Tycho crater
Natural Bridge on the Moon!
Posted by Joel Raupe at 11:45 PM