LROC: Shadows in Egede A 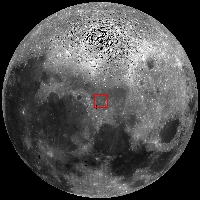 
As on Earth, that 'golden time' just before the sun dips below the western horizon produces spectacular shadow effects on the Moon, dramatically accentuating perceived surface roughness. Because the Moon has no atmosphere, its shadows are very sharply defined and the contrast between illuminated and shadowed areas is high. The Apollo astronauts often reported difficulty in judging distances to objects because without a hazy or dust-filled atmosphere to 'soften' the view, distant objects looked very similar to objects that were close up. Shadows are useful to planetary scientists doing remote sensing investigations because their length can help us determine the size of the object casting the shadow.

For example, here we see a family of boulders resting on the inner slope of Egede A crater (51.56°N, 10.45°E). Were this a horizontal surface, the shadow length of the largest boulder in the featured image would indicate its height to be approximately 61 m. The calculation is made by knowing the solar incidence angle and using a bit of high school trigonometry. Actually, however, the surface is not horizontal -- an 'early sunset' is produced for these boulders by the sloping crater wall, effectively exaggerating the boulder's height. Therefore the true height of this boulder is something less than 61 m. That means our sun angle is wrong for producing an accurate boulder size estimate. This also means that we would have to know the angle of the sloping crater wall in combination with the sun angle and shadow length to make our calculation. Planetary sciences teaches us to be cautious in our interpretations of what we think we see. Can you think of a way to determine the slope of the crater wall?


Imagine that you're standing on the rim of this crater. The sun would still be relatively high above the horizon. Note how the surface beyond the crater in the context image below is in full sunlight. High overhead is the Earth, looking four times the diameter that the Moon does in our Earth sky. If you then held your hand up to block the sun, the rest of the heavens would be raven black and filled with stars. All your favorite constellations would be recognizable, just as if you were back on Earth, with no visible change in their positions relative to each other -- the distance between the Earth and the Moon simply isn't great enough to register a visible shift among star patterns. You had better find some shelter soon, because it will get very cold here when the sun finally sets!


Note the faintly visible, light-colored ejecta pattern surrounding Egede A in the image below. This shows it to be a relatively young impact feature. The WNW-ESE trending crater chains to the north and south of Egede A are secondary impacts produced by ejecta from a much larger impact beyond the frame.

The full NAC image shows many additional features worthy of long study. Look carefully among the boulders for tracks that indicate movement as one or another rolled down the sloping crater wall. Additional interesting shadow effects can be seen in Central Peak Bedrock, Slumping Rim of Darwin C, and Necho's Jumbled Floor.

A great site for educational purposes! This year, on March 23, I will give a little speech about Wernher von Braun and why we are apparently unable or unwilling to return to our most important outpost, the moon.

Could you please mention something WvB on March 23 on your blog.
Here in Europe, this theme is on the EDGE...