San Antonio  New maps produced by the Lyman Alpha Mapping Project (LAMP) aboard NASA's Lunar Reconnaissance Orbiter (LRO) reveal features at the Moon's north and south poles in regions that lie in perpetual darkness. Developed by the Southwest Research Institute (SwRI), the LAMP instrument is sensitive on dim "starlight," specifically the band of electro-magnetic frequencies emitted when hydrogen (which usually travels in pairs) is reduced to a single atom, usually when encountering other forms of radiation.

This Ly-α (Lyman-alpha) spectral line is peculiar to neutral hydrogen, the most basic and abundant element in the universe, is produced by light with a wavelength of 121.4 nm, a frequency below the narrow band of optical frequencies visible to the naked eye. By gathering data revealed by this all-pervasive indirect starlight LAMP can peer into so-called "permanently shadowed regions" (PSRs).

In repeated passes over the lunar poles using this method researchers have able to determine the presence of very fine structure, such as the likely porosity of lunar surface rock or the most likely textures of water frost in super-cold volatile traps, in permanent shadow from the Sun, and only in those places on the Moon not overwhelmed by direct or immediately indirect sunlight. 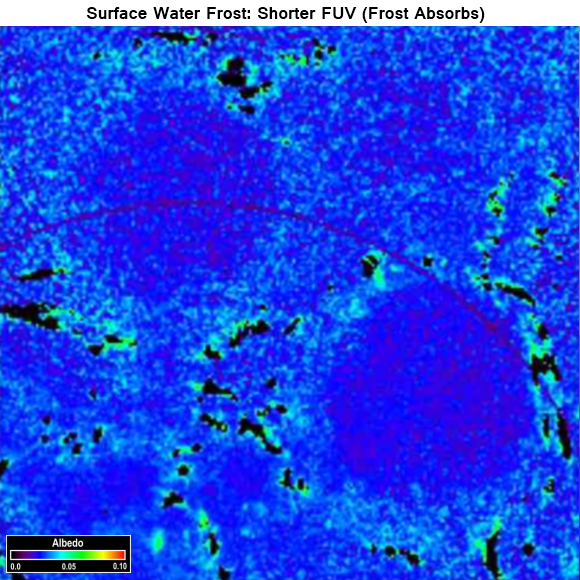 The LAMP maps show that many PSRs are darker at far-ultraviolet wavelengths and redder than nearby surface areas that receive sunlight. The darker regions are consistent with large surface porosities — indicating "fluffy" soils — while the reddening is consistent with the presence of water frost on the surface. 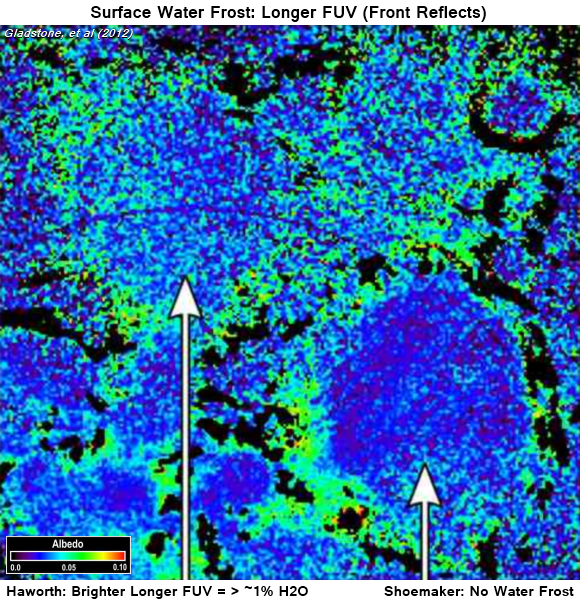 "Our results suggest there could be as much as 1 to 2 percent water frost in some permanently shadowed soils," says author Dr. Randy Gladstone, an Institute scientist in the SwRI Space Science and Engineering Division. "This is unexpected because naturally occurring interplanetary Lyman-alpha was thought to destroy any water frost before it could accumulate."

The LAMP team estimates that the loss of water frost is about 16 times slower than previously believed. In addition, the accumulation of water frost is also likely to be highly dependent on local conditions, such as temperature, thermal cycling and even geologically recent "impact gardening" in which micrometeoroid impacts redistribute the location and depth of volatile compounds.


Finding water frost at these new locations adds to a rapidly improving understanding of the Moon's water and related species, as discovered by three other space missions through near-infrared emissions observations and found buried within the Cabeus crater by the LCROSS impactor roughly two years ago. During LRO's nominal exploration mission, LAMP added to the LCROSS results by measuring hydrogen, mercury and other volatile gases ejected along with the water from the permanently shaded soils of the Moon's Cabeus crater.

"An even more unexpected finding is that LAMP's technique for measuring the lunar Lyman-alpha albedo indicates higher surface porosities within PSRs, and supports the long-postulated presence of tenuous 'fairy-castle' like arrangements of surface grains in the PSR soils," says co-author Dr. Kurt Retherford, a senior research scientist also in SwRI's Space Science and Engineering Division.

Comparisons with future LAMP maps created using data gathered from the Moon's day side will prove helpful for revealing more about the presence of water frost, as well as the surface porosities of the darker surface features observed. The LAMP team is also eager to apply the Lyman-alpha technique elsewhere on the Moon and on other solar system objects such as Mercury.


LRO's findings are expected to be valuable to the future consideration of a permanent Moon base. The permanently shadowed regions of the Moon are revealing themselves to be some of the most exotic places in the solar system, well worthy of future exploration, says Retherford. Any discovery of water frost and other resources in the area also could reduce the need to transport resources from Earth to a base at the pole.