The impact crater in today's Featured Image rests on the edge of another crater known as Brayley G, however this crater is most likely volcanic! Brayley G is a beautiful volcanic vent located in the mare at 24.2°N, -36.4°E. In 2008, before LROC launched, we wrote about Brayley G in the Apollo Image Archive Featured Image.

Today we are proud to present a LROC NAC mosaic of the 3 km wide and less than 5 km long feature. Compare the new LROC NAC observation to images from Apollo 15 and 17 in the graphic below (or visit the Apollo Image Archive). Note how the differences in incidence angle highlight different features within Brayley G. The higher-incidence Apollo images highlight the morphology of the edges of the vent and the concentric faults. The lower-incidence LROC NAC image reveals the interior of Brayley G, which contains many boulders along the inside wall and more collapse features. 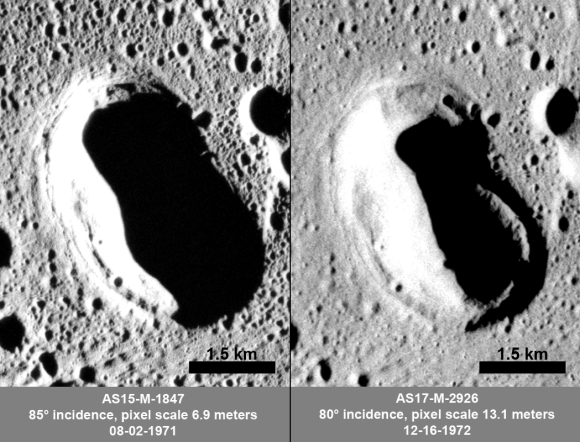 So how do scientists tell the difference between a volcanic vent and an impact crater? Most lunar craters are bowl-shaped and circular depressions with raised rims. When an impact occurs it excavates material from below the surface and ballistically ejects that material outward from the point of impact. This process leaves a visible ejecta blanket around the crater rim. Over time, erosion and slumping of crater walls can degrade and eventually remove an elevated crater rim. Studying examples of small, recent impacts shows the link between these physical processes and the surface features they leave behind. Volcanic vents, on the other hand, are usually not circular and they do not have raised rims. While volcanic vents do not have impact ejecta blankets, they can be surrounded by a "halo" of pyroclastic material from a past eruption. 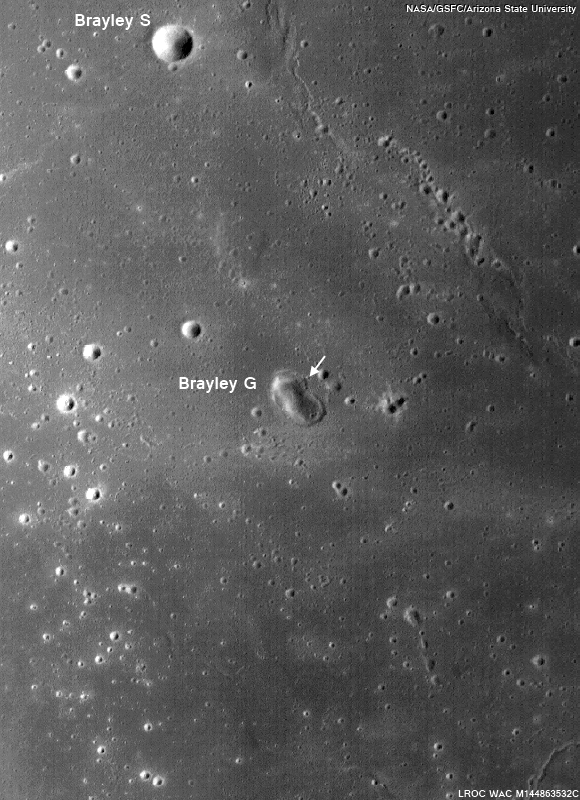 Brayley G is most likely a volcanic vent since it is has no elevated rim, is oblong in shape (not circular), and has no ejecta blanket. There are also concentric lines on the inside edge of Brayley G, which may be evidence of concentric faults, left by the partial collapse of the vent. Some depressions may also be formed by the collapse of a sublunarean cavity, such as an drained lava tube.