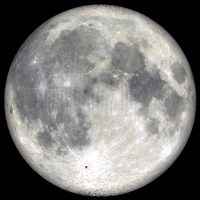 Hardly rare in scope or origin from similar craters all over the Moon, Tycho stands out like a bright star in the nearside southern Highlands because its bright rays radiate outward over the face of an entire Full Moon. Those rays make Tycho visible to the naked eye on Earth.

At a youthful 109 million years of age, relentless gardening by micrometerors has not yet smoothed the crater's reflective rougher edges, nor has a never-ending rain of charged particles, from the Sun and beyond, merged it's coloration into the background.Later impacts have not superimposed themselves or covered over the flash-frozen record of the mere minutes and hours following the explosive release of kinetic energy that created Tycho.


Among these finer details retained by Tycho are the pools of impact melt on the inner terraces and not far outside the crater's high rim, like the 'paved' pond Surveyor 7 nearly landed on in 1968, seen in the stark beauty of LROC Narrow Angle Camera observations.


The progenitor, the object that struck the lunar highlands and created Tycho threw up a lot of material in those first seconds afterward. Some of this material sped away at escape velocity, casually returning to the surface much later, if ever. Some sped away laterally as an immediate shock wave, carrying with it enough force to clip the tops of mountains on the south edge of Mare Serenitatis, knocking down the bright material of the Tortilla Flats in Taurus Littrow, sampled by Apollo 17 in 1972.


Some of the cloud scooped up by the blast hesitated above the area from where it was lifted and piled back down onto the surface outside the molten scar but most of the height where Tycho formed had to have been there before the explosion. We can tell this from the deep rutted channels carved into the highlands for hundreds of kilometers away from its center. The shape of the lunar surface around Tycho is not defined by what piled up but what remained after thousands of square kilometers of material were gouged away.


The terraces on the inner walls of Tycho became a place for impact melt to pool and cool, so the terraces, by and large, were unlikely to have been formed by later slumping. We're left with a picture, immediately after the Tycho impact event, of a ragged scar, glowing hot in those first hours, from the central peak of deeper rock that rebounded in a heap (never higher than a crater's rim) to the very lip of the outer rim. It must have been a scene right out of Dante's Inferno.
Zooming in on these "Southeast Tycho" impact melt ponds, in the images above and following, note the fan of these ponds seem to flow downhill from a particularly ragged spot on the rim and apparently from further north channeled from an less distinct portion of the circumference of Tycho's rim. It's hard to imagine Tycho filled to the "brim" with molten rock, though the original melt was probably higher before it solidified to its present level.


It's easier to imagine very hot material briefly pasted on the inside walls of Tycho sliding down to pool and form the ponds on the inner wall terraces. The ponds on the outside of Tycho are relatively sparse, but so is the slope acreage elevations outside the crater's interior. Before the anatomy of Tycho cooled and hardened some of the hottest melt was slung high seems to have collapsed like the opening rip of an ocean wave, which quickly froze, liquid rock that fossilized forty million years before the KT Boundary Extinction event brought an end to the Age of Dinosaurs here on Earth.

Tycho may be the same as many other craters on the Moon, but it's relative youth "in Moon years" makes it an easy choice for mapping the immediate aftermath of a powerful impact on an airless body, at least for the next half billion years or so.