Hadley Rille and the Mountains of the Moon 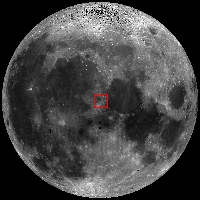 
On 20 July 2011 (coincidentally, the 42nd anniversary of the first steps humans took on another world) the NASA Lunar Reconnaissance Orbiter was commanded to roll to the east, allowing the Lunar Reconnaissance Orbiter Camera to obliquely observe Hadley rille and the Apollo 15 landing site. One of humanity's greatest voyages of exploration, the adventures of mission commander David Scott, lunar module pilot James Irwin, and command module pilot Al Worden transformed our understanding of the Moon and the Solar System. The shadow of the descent stage of the Lunar Module Falcon is visible, as is that of NASA's first lunar roving vehicle. Additionally, the sampling stations explored by the Apollo 15 astronauts are easy to pick out.


Apollo 15 was the first of three long-duration “J-missions”; more would have flown had the Apollo program not been brought to a premature conclusion in 1972 after the Apollo 17 mission. The J-missions featured heavily instrumented command and service modules, improved spacesuits to promote crew agility, upgraded lunar landing vehicles, and the electric Lunar Roving Vehicles (or LRVs) to expand the crew's range on the surface. Prior to the mission, the Apollo 15 crew received extensive geoscience training, which (along with the increasingly capable hardware) resulted in an extraordinary bounty of scientific results. Apollo 15 was also the only lunar mission where all crewmembers were graduates of the University of Michigan and United States Air Force officers (the lunar module, Falcon, was named after the mascot of the United States Air Force Academy, and the Apollo 15 command module Endeavour is now on permanent display at the National Museum of the U. S. Air Force in Dayton, OH).


The geologically complex Apollo 15 site is a high priority target for future human lunar exploration, and consequently was one of the Constellation Regions of Interest that were a focus of LROC observations during the LRO Exploration Systems Mission Directorate mission (the 1st year of LRO operations). Thanks to the exploration of the Apollo 15 astronauts, we now have a well-defined set of scientific questions that can only be addressed through a future human sortie mission to the Hadley-Apennine region. In addition, recovering materials from the descent stage of Falcon would provide valuable information to present-day engineers about how materials survive on the lunar surface for long periods of time.


On Saturday, November 5, as part of the School of Earth and Space Exploration's annual Earth and Space Exploration Day, Arizona State University unveiled a display featuring a piece of Apollo Lunar Sample (ALS) 15555, a mare basalt collected by Col. Scott about 12 meters from the rim of Hadley rille at Station 9A. This lunar rock is the largest and one of the most intensively studied samples collected by the Apollo 15 astronauts, and is predominantly composed of silicate minerals such as olivine, pyroxene, and plagioclase. The bulk composition of 15555 is thought to represent a primitive volcanic melt and has been used for experimental and theoretical studies related to the geologic origin of lunar basalts. Planetary scientists use information gleaned from such analyses to gain key insights into how terrestrial planets like the Moon and Earth form and evolve. Sample 15555 has also been used for critical tests designed to help perfect and calibrate methods of radiometric age dating employed by different laboratories around the world.


What is a mare basalt and what is its significance? The lunar mare basalts are very similar to terrestrial basalts. If you drove up to Sunset crater outside Flagstaff AZ, you can find basalt. If you go to Hawaii, Iceland, India, Ethiopoa and many other countries you can find basalt. The oceanic crust on the Earth is composed of basalt. If you visit Mars you will likely land on basalt or basalt derived sediments. If you land on Venus - same! The Dawn spacecraft is right now orbiting an asteroid, Vesta, that is composed of basalt. Basalt is common in the Solar System. The fascinating fact about basalts is that they represent a sample of the upper mantle. We can't get to the mantle directly, but nature provides us with samples of the deep interior (mantle) in the form of basalt. Volcanism is the delivery truck! Since the mantle makes up most of the mass of the Earth, Mars and the Moon we must have samples of the mantle to understand each body as a whole. You can think of 15555 as a piece of the Moon's interior, even though it was picked up on the surface.


A generous loan to Arizona State University from the NASA Lyndon B. Johnson Space Center, this 76 gram (2.7 ounces) piece of mare basalt will be displayed in the Lunar Reconnaissance Orbiter Camera Science Operations Center Visitor Gallery. This stunning and unique lunar sample display will enable visitors to view and learn about an amazing piece of our Moon, while just a few meters away, behind a glass partition, the LROC team is sending commands to LROC and receiving images in return that enable scientists and engineers to plan for future human and robotic exploration of the Moon.

We heartily encourage anyone interested in space exploration to come view this priceless American treasure and learn how lunar scientists around the world are pioneering your future in space. The work we do at LROC is tremendously exciting, but ultimately, it is the human passion for discovery that drives this enterprise.

Explore the complete NAC oblique image of the Hadley-Apennine valley!