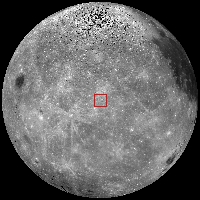 
Is this meandering escarpment an example of 1) a lobate scarp, or 2) imbricated deceleration lobes? Lobate scarps represent portions of the lunar crust that thrust-faulted, with one portion riding up and over the other in a process that is suggestive of crustal shrinking. Imbricated deceleration lobes result from fluidized impact ejecta deposits, with some deposits riding up and over others in a similar-looking way. Fluidization in this sense should not be confused with liquid or water - these materials are totally dry!

The cause of this type of fluidized flow remains somewhat unknown, but may involve acoustic energy within the moving mass of debris. Some of this energy may be supplied by the surface beneath the debris flow as secondary impacts and tectonic readjustments keep it vibrating following the large impact that initiated the flow. Try pouring some sand on a slanted board while you drum on the board with your fingers. You will see that the drumming removes most of the friction and allows the sand to flow freely. These type of flows often travel great distances before losing energy as they encounter slopes too steep to climb. On Earth we call them sturzstroms.

A complication in the case of today's Featured Image is the presence of scarps that are clearly related, but which oppose each other in their orientation (left side of frame).


The presence of this feature within the deposits of a highland crater floor might argue that fluidized ejecta are responsible because these debris flows often collect (some even appear to 'pool') within the low-lying crater floors. The material could be seen as so fluid that even after portions of the material have climbed the crater wall and stalled, other portions are able to slide backward to create the secondary 'reverse' escarpment in the Featured Image. Similar features within fault escarpments are not unheard of, however, and are referred to as splay faults. Thus the discussion remains an open one...


Additional indications of fluidized ejecta are located throughout the surrounding region in the above context image. However, although a great many highland craters are present within this region of the Moon, none stand out as being the unambiguous source of these deposits. Knowing the true mode of origin for features like these is basic to the goals of planetary science. A properly equipped team of astronauts conducting seismic measurements is probably required to make a definitive determination. Are there any additional clues visible in the full NAC image that might help solve the mystery? Examples of lobate scarps can be found in Schrödinger, and Xenophanes craters. Examples of fluidized ejecta include the Lavish Lobes of Necho R and King Crater Ejecta Deposits.
Posted by Joel Raupe at 10:41 PM