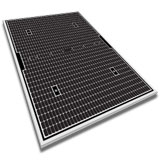 Albuquerque – EMCORE Corporation, a leading provider of compound semiconductor-based components and subsystems for the fiber optic and solar power markets, announced October 31 it's been awarded a contract by ASRC Research and Technology Solutions (ARTS) in Greenbelt, MD for design, manufacture and delivery of solar panels for NASA Ames Lunar Atmosphere and Dust Environment Explorer (LADEE) mission in 2013.


LADEE is a robotic mission designed to orbit the Moon. Its main objective is to study and characterize the lunar atmosphere, including fine dust particles suspended above the lunar surface. The spacecraft is currently scheduled to be launched in early 2013 aboard a Minotaur V vehicle from Wallops Island.


A total of 32 solar panels will be built for LADEE at EMCORE’s state-of–the-art manufacturing facilities located in Albuquerque, New Mexico.
Posted by Joel Raupe at 7:09 PM