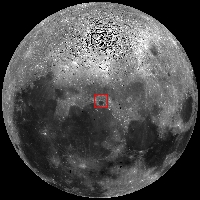 
Impact craters of the size shown above are often bowl-shaped, but can also present flat bottoms and concentric or 'bench' features like those seen here.


This small (~140 m diameter) crater is characterized by a low-relief rim, shallow and hummocky floor containing a small central crater, and a large population of associated blocks or boulders. Blocky and irregular craters are often the result of low-velocity secondary impacts, but can result from high velocity as well. The circularity of this crater suggests that it is the result of a high-velocity, primary impact.


Experiments were conducted in the late 1960's using a high-speed gun to fire projectiles at targets in an attempt to understand the process of small crater formation. Loose sand and epoxy resin-bonded sand was used to simulate lunar soil (regolith) over a hard bedrock substrate. These experiments determined that different types of small crater morphologies result from different thicknesses of lunar soil. The bench crater morphology shown in today's Featured Image forms when the regolith is thin with respect to the crater's final diameter.

Our featured impact had enough energy to penetrate the lunar regolith layer to the hard basaltic bedrock beneath. But because the lunar soil is unconsolidated, this energy was more effective in displacing the soil than the bedrock. Hence, we see a wide impact feature with a shallow bottom instead of a bowl. The substrate does not have to be bedrock to produce a bench crater, but there must be a contrast in target strength. The clear presence of boulders in the case of today's featured crater does, however, indicate that bedrock fragmentation was involved in its production.

Are there any similar craters visible in the full NAC image?