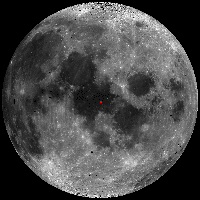 
Since its arrival in lunar orbit in June 2009 every three months LRO investigators have made available data collected by their respective instrument teams during the 90-day period between six and three months prior.

On September 15, for example, the LROC team, led by Dr. Mark Robinson at Arizona State University (and by far the most consciencious of these admittedly very busy science teams), released to the PDS (Planetary Data System) photography collected by their Wide and Narrow Angle cameras (WAC and NAC) between mid-March through  the middle of June 2011. The LROC team has also continued to make improvements to their already impressive set of web-based tools, created for sorting through these vast stores of data, most recently marked improvements to the ACT-REACT QuickMap interface.

So, every ninety days "lunatic" investigators, even rogue investigators like ourselves, everywhere on Earth jump on these data and begin scrambling through an ever-growing list of favorite targets, anxious for any new views or improved resolutions, even a different degree of illumination. Though it's rare when a new high resolution NAC view of a previously imaged location on our list becomes available it's difficult to complain when remembering more than a third of the Moon's surface has now been mapped at a half-meter per pixel resolution or better, or that the entire Moon has, by now, been photographed at 50 to 60 meters resolution several times over, at a respectable variety of illuminations.

After September 15, the date that a seventh batch of LROC observations were released, nearly two months passed before we finally reached the Moon's now-famous "skylights" on our list, in particular the now-famous pit craters at Marius Hills, Mare Ingenii and Mare Tranquillitatis.

No new LROC NAC views appears to have yet been processed of the "Haruyama pit," in the upper stretches of the Sinuous Rille A in the Marius Hills (14.094°N, 303.224°E). A low angle, very detailed image of the huge pit in the Mare Ingenii basin (35.95°S, 166.06°E), captured in 2010, will be hard to improve upon, though perhaps a view revealing more of that formation's boulder-strewn floor under a high sun would help expand our understanding of its extent.

And we've still not had the time to look for any better views of the natural bridge north of King crater, nor what appear to be small pits on the floor of Messier A.  There does not seem to be anything new to add to the little we know about the other, much smaller and far less dramatic "pit" north of the skylight pictured above (and below).


The Sinas group pit crater captures our imaginations perhaps primarily because, like all great discoveries, it raises so many more questions than it answers. These initial historic surveys will be among those things 100 years from now LRO investigators will be credited for as paying the treasure and devotion paid to the entire LRO mission all by themselves.
Posted by Joel Raupe at 12:32 AM