LROC: "The Chicken or the Egg" 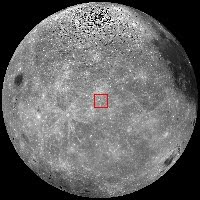 
Which arrived first, the impact melt or the boulders in this image? In other words, did these boulders arrive after melt had pooled, displacing the melt while still molten; or were they there in advance of the melt, which flowed around and partially over their southwest flanks?


While there are no obvious signs of a 'splash' in this melt that might indicate the late arrival of the blocks, this question still seems like a bit of a puzzle at this image scale.

Zooming out a little provides the information required to answer the timing question ...

In the above image, we can see how the melt flowed down this slope and around the boulders, which just happened to be in its path. The flow occurs on the portion of the Klute W crater wall adjacent to a neighboring crater, and along a portion of the rim where extensive mass wasting and other complex adjustments have occurred following the Klute W impact event.