TSR: Fear of a Chinese Moon 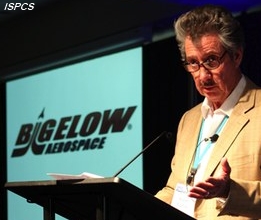 Robert Bigelow, speaking at the ISPCS conference in New Mexico this month, claimed that China is on a path towards taking control of the Moon within 15 years [ISPCS].

Robert Bigelow is best known in space circles as the founder of Bigelow Aerospace, the company he created over a decade ago to develop commercial space habitats using expandable (or inflatable) technology licensed from NASA. The Las Vegas-based company has successfully launched two prototype modules, Genesis 1 and 2, to demonstrate the technology and has plans for larger modules and commercial space stations for companies and so-called “sovereign clients”, nations without their own indigenous space programs.


Bigelow’s plans originally generated considerable skepticism in the broader space community. However, as the company won success with its Genesis missions and found interest in its plans from potential customers and even NASA—which sees the demand generated by Bigelow’s commercial habitats as a key part of the broader business case for the agency’s commercial crew plans—Bigelow has gained considerable credibility. Now, he’s using the platform he has as one of the nation’s leading space entrepreneurs to broadcast a warning about an unusual, even quixotic, threat to America’s space ambitions: that China will, in effect, seize the Moon.


Speaking at the International Symposium for Personal and Commercial Spaceflight (ISPCS) in Las Cruces, New Mexico, earlier this month, Bigelow spent very little time talking about his own company and its ambitions.


Instead, he spent most of his nearly 40-minute speech focusing on his belief that, within 15 years, China will notonly land people on the Moon, but will claim it as its own territory, locking out the United States and other nations.


Why would China do such a thing? Bigelow is convinced that China’s quest for prestige—to demonstrate that it is the most powerful country in the world—will inevitably drive the country to lay claim to the Moon. “China already has a grand national vision,” he said. “Their vision is that China wants to be indisputably number one in the world, measured any way you want to measure.”


That means, he said, not just simply repeating the past achievements of the US in space but moving beyond them. “Why not take the all-important syllogistic next step: ownership, ownership, ownership?” he suggested. Doing so, he said, would generate “global psychological impact” and considerable prestige for the Chinese people. “I think nothing else the Chinese could possibly do in the next 15 years would cause as great a benefit for China,” he said.


He argued that China, with its growing wealth and its historical “ability to maintain focus”, would be in a position to land humans on the Moon and start making claims between 2022 and 2026. “China has an ability to focus and galvanize its programs because of the centralization of the government” that can allow them to stay on that schedule, he told reporters after his ISPCS talk.


One obvious obstacle is the Outer Space Treaty, of which China is a party, which prohibits countries from making territorial claims to the Moon or other celestial bodies. Bigelow suggested, though, that China could work to amend the treaty through the support of countries in Africa and Latin America where China is making major investments. Alternatively, he said, China could simply decide to withdraw from the treaty. Public opinion, he said, won’t be factor. “There isn’t going to be World War Three over this,” he said. “There isn’t going to be a single shot fired.”


Read the full article at The Space Review, HERE.
Posted by Joel Raupe at 8:07 PM