Soaring over the Apennines 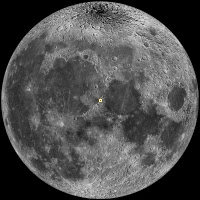 This site is nestled between the towering Apennine mountains to the east, attaining heights of 3-5 km, and the 200 meter deep, v-shaped valley of Hadley Rille to the west.

The experience gained from the successful landings of the preceding Apollo missions afforded mission controllers confidence that a landing descending through a mountain range was possible, though it required a steeper descent angle (25° rather than 14°).

A captioned video of the descent of Apollo 15 conveys the excitement of astronauts David Scott and James Irwin as they set down near Hadley Rille. The Hadley Rille landing site also presented an opportunity to test the capabilities of the new lunar roving vehicle (LRV).

The Apennine Mountain Range formed during the Imbrium basin-forming event, and it was hoped these mountains contained materials from very early in the Moon's history (which they did!). As astronauts Irwin and Scott descended over the Apennines, they reported a floating sensation that resulted from glimpsing mountain peaks passing by the windows of the Lunar Module (LM). The descent was a complete success, and the LM set down near the planned site! Although, the astronauts were a little surprised to land with one foot-pad in a small crater, placing the vehicle on a slant.

Three EVAs (or traverses) were planned for Apollo 15 using the LRV, two of which allowed sampling part of the Apennine Mountain Range to the south and southeast and required long (multi-kilometer) traverses.

Astronauts Scott and Irwin were accomplished field geologists; listen HERE as Commander Scott recently reflected on his Apollo 15 experience, including the importance of field-geology training.

Related Posts:
Man's first wheels on the Moon at 41 years
Retracing the Steps of Apollo 15: Constellation Region of Interest
Apollo 15 Lunar Laser Ranging Retroreflector - A Fundamental Point on the Moon
Layers near Apollo 15 Landing Site
Hadley Rille and the Mountains of the Moon
Kaguya captures Hadley Rille and Apollo 15
Posted by Joel Raupe at 10:51 PM