Study in superpositioning at Vavilov D 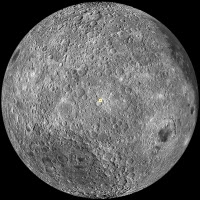 The second image above spotlights a spot on the northwestern curve of the wall of Vavilov D near where the Eratosthenian Vavilov erased the older crater's anatomy. The relatively smooth textured area in the upper left corresponds to the outside of Vavilov D, and the rest of rough/craggy surface is the interior crater wall's steep slope.

The two degraded craters (~280 m in diameter) near the middle of the opening image exhibit fascinating overlying smooth features that may have formed as material flowed downslope (arrows).

Other morphologic pits/dents on this slope also have similar textures. What we are seeing here are most likely remnant impact melt that was thrown out of the Vavilov crater. Craggy sloped surfaces with patches of smooth material are often found associated with young impact craters -- formed as impact melt flowed over and around the newly formed crater.