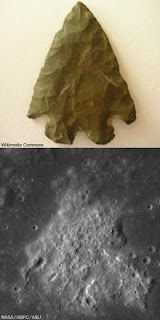 Mons Hansteen (12.2°S, 50.21°W) is a familiar nearside landmark, when viewing a Moon that's almost Full through a modest telescope. As the reader can see in the picture of the Full Moon at the end of this post, it stands out from its surroundings in the far south Oceanus Procellarum.

It's nicknamed "the arrowhead" because it looks like one, like, long-ago, it was knapped to a point by the patient hand of a hunter and now rests half buried in the darker mud of a trail, perhaps uncovered by a recent downpour.

Close investigations of the Moon over the past half century reveal what investigators call "Hansteen Alpha," or Hansteen α, stands out geologically and in other ways. The small mountain is made of different stuff than most of what is found on the lunar surface and the volcanism that flooded and re-flooded the Moon's basins. It's optical brightness is complimented by differences at other wavelengths as well, presenting a spectral profile found in only a few other locations on the Moon.

Hansteen α is one of the Moon's red spots, bright with an albedo similar to the lunar highlands but spectrally red, brighter in shorter wavelengths and characterized by absorption in the ultra-violet (UV).

Moreover, it must be a younger feature than it might seem on first glance, younger than certain of the larger craters nearby and other features in its neighborhood that were clearly overrun repeatedly by the darker basaltic lavas that periodically flooded and re-flooded the lower elevations over a period nearly three billion years long.

Hansteen α resembles the Moon's highlands but, beginning early in the post-Apollo era, investigators noted differences in texture, color and measured albedo. In the close-ups at the beginning of this post, showing some of the highest elevations of Hansteen α, depressions can be seen clustered on terraces. These seem to have once been volcanic vents.  Volcanic vents are not particularly rare on the Moon, but the kind of material that emerged from these is clearly not the same stuff that flooded its surroundings.

The margins of Hansteen α seem abrupt, with steeper slopes than is found around the edges of the more common basaltic domes. This might be in keeping with suggestions that the kind of lava emerging into and out of this feature was thicker, related to its composition and the heat necessary for melting and transport. It also provides geologists with clues about its age relative to the volcanism that flooded Procellarum in this region.

The Hansteen α might have formed from a "secondary," and "more evolved" volcanism, something certainly less common than the basaltic lavas that flowed out into the Moon's broad basins, not once but repeatedly, over a 2.7 billion year period, from the Nectarian age, when the Moon and Earth were only 600 million years old, until just prior to the Copernican period 1.2 billion years ago.

These more recent high-resolution images from LRO show groupings of blocky boulders, mostly related to mass wasting along slopes though some of these clusters are found on level areas and don't appear to be the result of impacts.


So, just what is Hansteen alpha? In two papers presented in 2011 and 2012 to the Lunar and Planetary Science Conference, Hawke, et.al., representing some of the more noted investigators working with data returned from LRO (the more recent of these being  "The Geology and Composition of Hansteen Alpha," 43rd Lunar and Planetary Science Conference (2012), #1754), wrote, "Non-mare volcanism is the only viable process for the formation of Hansteen α."

That paper, along with others those investigators cite, along with still others cited as references below, present truly fascinating discussion of how instruments on-board Clementine (1994), Lunar Prospector (1998-99) and both the LROC cameras and the Diviner instrument, flying on LRO since 2009, are actively being used to weed out the history of this unique feature and how it relates to the complicated volcanic stratigraphy of the Procellarum basin.