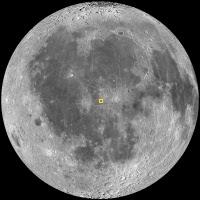 A linear topographic low (a depression or graben) located southeast of Milichius crater (9.342°N, 330.646°E) shows tell-tale signs of mass wasting, the ongoing process of erosion that levels out surface topography (see figure below). A large mass movement, more than 1 kilometer across, eroded part of the depression wall near its southwest end (see opening image). Unlike the example of mass wasting highlighted in Tuesday's Featured Image of Schubert A crater (January 14, 2014), which resulted from many small individual rock movements, this material likely moved as one large unit. Was this the result of a landslide or of a slump? Understanding how landforms erode tell us about their properties including angle of bedding planes, composition (such as rock or soil), and mechanical properties such as shear strength (the ability to resist downslope movement).

The example near Milichius crater, however, does not occur in a large impact crater. Yet, the segmented arcuate faults near the head of the material (upper left of opening image) are similar to those of slumped materials in impact craters. Arrows point toward the end of the material, or toe, where rock and debris has come to rest in the floor of the narrow (roughly 1.5 km wide) linear depression. High-resolution NAC stereo imagery of this area would be useful in order to better constrain the morphology of this material and allow us to better differentiate between a landslide or a slump.

Explore the full NAC image, HERE, to look for more landslides in this area. Which of these is likely to be of a much older age?