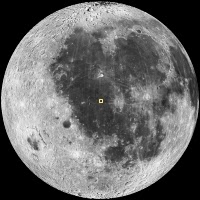 Rima Suess is one of many sinuous rilles on the Moon. Located in Oceanus Procellarum between the Marius Hills and Kepler crater, it is about 165 km long and trends in a NNW-SSE direction. Sinuous rilles often exhibit meandering channels, which may have formed as open channels or lava tubes which subsequently collapsed.

About 1 km north from the northern end of Rima Suess, there are 5-7 enclosed, irregularly aligned sinuous depressions (see next NAC context image). These are likely all related to another Sinuous rille (about 30 km long) at the north of these depressions (see WAC context image). The opening image highlights the southern, less well-developed tail of one of these irregularly-aligned sinuous depressions. The subsidence here seems to have proceeded unevenly and then stopped, although it is possible that the subsidence is still ongoing, albeit very slowly.

The enclosed, isolated depressions indicate the potential collapse of a subsurface void, which in this case is likely to have been lava tubes. One potential hypothesis is that the thickness of the lava tube roof in this region of the Moon is variable, so in some places the roof is thinner (meaning less strong) than in other places.  The thinner roofs would be more prone to collapse, resulting in a partially collapsed tube and the discontinuous channels in the Rima Suess area that you see today.

One of the lunar pits, which are possible entrances to the subsurface voids, are located in the middle of a sinuous rille near the Marius Hills. Even though no pits had been observed in this northern Rima Suess area, the subsurface caves could be still there, waiting for us to explore.