A colorful history of floor-fractured Komarov 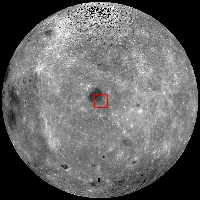 Komarov, best seen in the context image below, is known as a floor-fractured crater whose fractures likely formed through intrusive magmatic activity. The western portion of Komarov crater has been modified by the deposition of smooth, low albedo material and the formation of floor fractures. Is this the same low albedo mare basalts that filled nearby Mare Moscoviense?


Though Komarov is located on the edge of Mare Moscoviense, it is not covered in the same smooth, low albedo mare basalts that are seen in the Moscoviense basin today (See WAC context image above and Clementine false-color image below). Compositional differences in and around Mare Moscoviense indicate multiple episodes of volcanic activity. Three bands (415 nm, 750 nm, and 1000 nm) from the Clementine UVVIS camera were used to create the false-color image below. The three bands were ratioed to control the colors of the false-color image. The 750/415 ratio controls the red component, which is an indication of low titanium or high glass content as found in mature lunar regolith and to a greater degree pyroclastic deposits. The 750/1000 ratio controls the green component and is an indicator of the amount of iron on the surface. The 415/750 ratio controls the blue component and indicates high titanium or bright slopes and albedos.

Notice in the false-color image above that Mare Moscoviense appears blue (higher in titanium since we know Mare Moscoviense is a low albedo feature), whereas Komarov appears red. Even within Komarov, the western side is more red (likely pyroclastics or low-titanium basalts) than the eastern side, which is comparable to deep red of the surrounding highlands (mature regolith). A crater in the NAC frame from which Today's Featured Image was taken appears bright blue and stands out from the rest of Komarov's floor. This bright blue color is likely due to the fact that this crater is fresh and has brought up unweathered (fresh) higher albedo material from depth. The fresh crater from the opening image is too small to be seen in the Clementine false-color image.

Investigate this complex region for yourself, HERE.