Hansteen Alpha yields some of its secrets 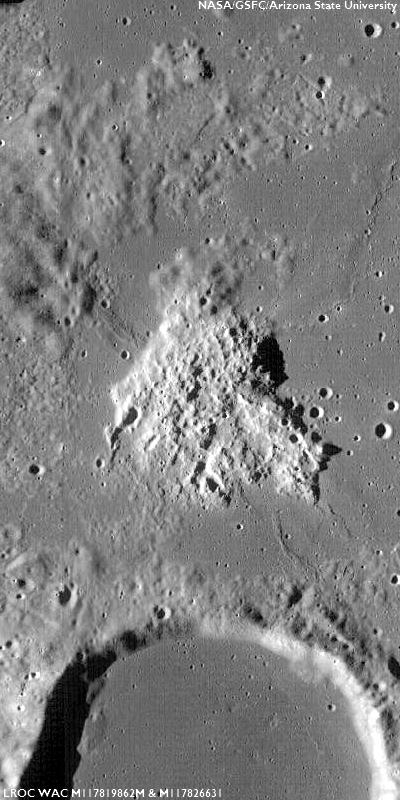 Mons Hansteen (12.3°S, 309°8E), unusually bright for a remnant volcanic feature, is a 30 km-wide, 300 meter high mountain that, together with the inundated 48 km-wide Billy crater below, are telescopic landmarks of the southwest extremes of Oceanus Procellarum. Data from the Diviner instrument on board LRO, analyzed at Stony Brook University & UCLA, identified the southeast and southwest points of this feature among the surprisingly few silicate signatures found on the Moon. The LROC Wide Angle Camera swept up this 50 km-wide scene over the course of LRO orbits 2496 & 2497 on January 11, 2010. The mosaic was processed using Ron Evans' WAC Previewer [NASA/GSFC/Arizona State University].
Rachel Kaufman
National Geographic

If the moon were actually made of cheese, there'd be a new flavor of dairy for humans to sample.

Data from NASA's Lunar Reconnaissance Orbiter (LRO) have revealed a new type of rock on the lunar surface—which scientists say was spat up by a style of volcano never before seen on the moon.

Until now, scientists had believed the moon was made of two basic types of rock: dark basalt and light, calcium-rich feldspar. Both would have come from volcanoes spewing relatively runny basaltic lava. 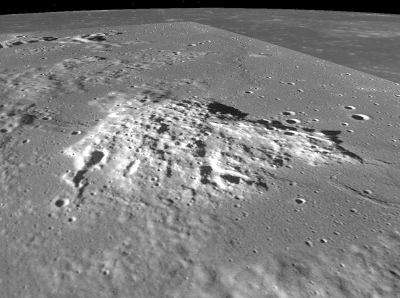 The mosaic of LROC WAC observations M117819862 & M117826631 overlaid on the Google Earth lunar digital elevation model allows for a simulated view of the bright, low-profile landmark, from high over Billy crater.
Posted by Joel Raupe at 2:22 AM