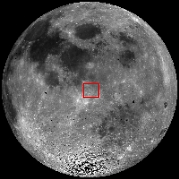 Petavius crater, a 177 km crater located at 25.28°S, 60.63°E, is one of an uncommon class of craters that have been modified by post-impact processes. What process could have produced the system of fractures that cut the floor, known as Rimae Petavius? Volcanism is the likely cause. Small patches of mare basalt exist in the north and south extents of the crater floor, which help cement this hypothesis. But unlike other mare filled craters, Petavius crater has only small patches of basalt.

Why did Petavius crater end up with such an extensive fracture system?


One hypothesis is that the fractures occurred as a result of volcanic modification. Uplift of the crater floor would occur as magma intruded beneath the floor and fracturing developed as the floor was pushed up. Because Petavius crater was not flooded completely, the fractures were never covered by basalt. The harder question is why is Petavius crater not flooded with basalt?


It is possible Petavius crater did not witness the same style of eruption as elsewhere on the Moon. Or maybe the magma underneath Petavius crater was not buoyant enough to completely flood the surface. Finally, it may simply be that the magma source region was relatively small, and thus only a modest amount of basalt was erupted.