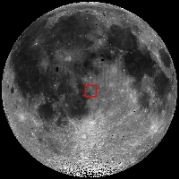 Many readers will remember the much publicized events of July 1994, when 21 ice fragments comprising Comet Shoemaker-Levy 9 impacted one after another with the atmosphere of Jupiter over a six-day period. Large, dark blotches were visible through backyard telescopes on the Jovian cloud tops for several months afterward. The largest impact produced energy estimated at six million megatons equivalent of trinitrotoluene (TNT).

What does comet Shoemaker-Levy 9 have to do with today's Featured Image?

The linear array of craters known to lunar scientists as Catena Davy on the Moon, a portion of which is shown above, is thought to have been produced by a Shoemaker-Levy 9-like string of objects traveling through space along identical orbits. Each object encountered the surface at slightly different times, produced by the objects' separation along the orbit. A small amount of lunar rotation as it moves around Earth through its own orbit results in an offset of each impact feature from its predecessor, producing a linear chain of impacts.

As was seen with Shoemaker-Levy 9, a weakly held together planetary body (such as a comet or rubble pile asteroid), can be fragmented and separated by tidal forces if it comes within the Roche limit of a larger body, and drawn out into such a string of objects. Similar crater chains have been discovered on several moons of the outer planets where the gravity wells of these gas giants are sufficient to pull bodies apart in this way. What might have done this within the Inner Solar System, where planetary tidal forces are weaker? In the case of Catena Davy, where the impact craters rest "shoulder to shoulder," the impactors may have been pulled apart shortly before impact, and struck the Moon in a rapid-fire sequence of short duration, rather than having been widely separated and striking over time. What clues would you look for to improve our understanding of what actually happened?

Comet Shoemaker-Levy 9 awakened world interest in the possibility for asteroid and comet impacts on Earth in modern times, the last significant example of which occurred on June 30, 1908 near the Podkamennaya Tunguska river in Northern Russia. That air-burst meteoroid encounter leveled more than 2,000 square kilometers of forest, but no human life was lost because no humans were present in this remote corner of planet Earth. The situation would be very different if such an event occurred over a metropolitan area. While these encounters are infrequent, they do constitute a natural hazard, and should be taken as seriously as other natural hazards (e.g. earthquakes, tsunamis, tornadoes, hurricanes, etc.).

Most of the impact hazard risk is associated with single asteroid bodies, not cometary strings. Astronomers are currently conducting sky surveys to identify as many of these objects as possible, determine their orbital parameters, and find out if any are currently on a collision course with Earth. As with all natural hazards, future incidents are indeed certain if such precautions are not taken. Click HERE to open the NAC mosaic for this feature. Additional discussion on crater chains can be found in our Mare Orientale post from March 2010, where the cause is likely to be from secondary, not primary, impacts.
Posted by Joel Raupe at 1:39 AM