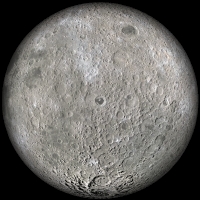 Each quarterly release of LROC data to the Planetary Data System (the twelfth, on December 15, covers the three months between mid-June and September), is not really complete until the KML index emerges, for viewing through Google Earth's lunar simulation.

Fortunately, the Lunar Reconnaissance Orbiter Camera (LROC) team made available to the public an incredibly useful set of improvements to their Web Map Server (WMS) Image Search tool, something that was already a real complimentary companion to the newer LROC QuickMap tool. Playing with the layers and search capabilities of the new tool, while studying the LUNAR landing site study, was enough to keep us busy.

The KML data are a fast and intuitive way yet to search directly for LROC NAC images, especially those with exceptionally high slew angles, the few oblique images. And the latest KML files appeared on the Massachusetts Institute of Technology servers December 21.


The oblique views are rare. Off nadir NAC observations are of a lower scientific value, perhaps, than the job of completing the high-resolution photography of the entire Moon, a goal the LROC team is closing in on. My favorite targets for these oblique views are never in the new batches, but there's always one or two that are breathtaking and unexpected.

Last September LROC's 11th release included an oblique look into the interior of Antoniadi, for example, that was then included in our post highlighting oblique views of Engel'gardt heights. Antoniadi, as it turns out, figures prominently in the aforementioned landing site study. Follow-up posts on that Eratosthenian crater, well inside the very ancient South Pole-Aitken basin, are in preparation.

Among the new, few oblique views that really stand out in the twelfth release is an off-nadir view of the central peaks of Tsiolkovskiy, shown up above. The complete field of view here is a highly re-sampled (less than 8 percent) version of what was originally a 6204 by 8955 mosaic (of LROC NAC M1098059280LR, swept up last July). It's reduced down to 580 x 800, or the maximum size allowable in a blogger post.

Because we derive vast amounts of valued-added imagery, in an image-intense subject of study, this last limitation has become a nagging problem we would like to solve.

We would welcome recommendations and/or reviews of image hosting sites, most especially those that do not presume to arbitrarily substitute photography with lossy resampling. Meanwhile, a planned migration to a new host for this website has been delayed yet again.


Like the oblique LROC NAC mosaic of the Moon's highest elevation at Engel'gardt, discussed here in early October, this latest view of Tsiolkovskiy took place while the area of interest was under a high Sun, and from a great distance. Thus the raw result is of low contrast, the details of relief given over to raw albedo. That, and the apparent lateral motion through a field of view made small by distance, results in a less than perfect aesthetically pleasing result. We will take what we can get before continuing with the work of putting together raw illustrations needed to offer posts about the LUNAR landing site study.

Bluehost is definitely the best web-hosting provider with plans for all of your hosting needs.