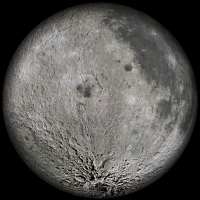 The opening image is of a surface swept by the ejecta of an unnamed 300 meter diameter fresh crater that is located about 1.8 km to the south. This area is on the floor of Nicholson crater (about 38 km in diameter), that is at the southeast edge of Orientale basin.

As you can see in the next NAC context image, the higher reflectance rays extending radially outward from the parent crater highlight the path of ejecta. But the actual area of the continuous ejecta deposition is difficult to detect from the reflectance contrasts alone. When a single ejecta particle hits it churns up the subsurface revealing brighter immature material from below.

Among the numerous rays, high reflectance spots can be found at the north side of multiple small craters (~40 m in diameters). Some appear to be pre-existing craters that had their rims eroded by the ejecta, thus revealing brighter immature material. The small craters with very bright ejecta may be the result of large blocks of ejecta that were thrown out at a shallow angle and plowed up the substrate also revealing immature material.

The overall effect of low angle ejecta spraying across the surface is similar to blowing dust on the Earth that erodes the landscape. Of course the Moon has no atmosphere, so the sand blasting effect lasts for a mere seconds rather the slow cumulative effect of wind-blown dust on the Earth.

Explore the newly disturbed surface on the Moon in full NAC frame yourself, HERE.