"Physics is fun, especially on the Moon!" 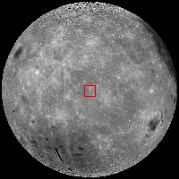 A distribution of boulders within the floor of an unnamed crater demonstrates physics at work. In the Featured Image (located in the lunar highlands at 6.275°N, 214.770°E) you can see that smaller boulders are (on average) closer to the boundary where the wall of the crater meets the floor. As distance increases from this boundary, the size of the individual boulders increases.

Why is this happening?

During the Apollo 15 mission, Commander David Scott performed a related physics experiment live for the TV cameras! You can watch the video here: Apollo 15 Hammer and Feather Drop. He dropped a rock hammer and a feather from the same height at the same time. The point of the experiment was to show that in an environment with no atmospheric drag (a vacuum) the feather and the hammer will fall at the same speed (and hit the ground at the same time) regardless of the difference in mass. This basic idea is attributed to Galileo. Read more about the Apollo 15 experiment HERE.

Physics is fun, especially on the Moon!