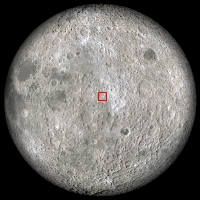 The law of superposition is one of the earliest geologic laws, based on the observations of Danish scientist Nicholas Steno.

What are the relative ages of the different craters in today's Featured Image?

In today's Featured Image, we have three separate craters. Buisson crater is the largest at 57 km, with an approximately 4 km wide unnamed crater on its rim.

Zooming in further, we see an even smaller crater, about 110 meters wide, in the 4 km crater rim. The superposition of these craters gives us a relative age relationship with the 110 m crater the youngest, followed by the 4 km crater, and finally Buisson crater.